Back to News Index

Wow, summer is flying by! July is nearly over and August is almost here. The summer has been an eventful one at Campus Manitoba and our partner institutions. We’ve been busy presenting at conferences — including PCCAT, CICan, and MADLaT — and working on new projects to improve access and mobility for Manitoba’s students. We’ve also attended the Rotary and Canadian Immigrant Career Fairs, where we connected with students from diverse backgrounds and talked to them about education and career opportunities in Manitoba.

Earlier this month, we celebrated the second birthday of eCourses MB. We launched the website as eCampus Manitoba in 2014 with 520 online courses. Today, there are 740! During that time, over 900 students have used our website to find out more about online education in Manitoba. Partnerships for Indigenous support and success

BU President Gervan Fearon and ACC President Mark Frison were two of nine signatories for a Memorandum of Understanding on Aboriginal Economic Success between the City of Brandon and the Brandon Urban Aboriginal Peoples’ Council (BUAPC). BU is a founding partner of the BUAPC. “Our partnership with the Brandon Urban Aboriginal Peoples’ Council has been a fruitful one for Brandon University, where we have a strong history of Aboriginal engagement,” said Dr. Fearon, who served on the Council for two years. “Together, we have made some incredible strides. We are eager to work with the City of Brandon and our other partners on the BUAPC to continue supporting gains in Indigenous education, employment and business.”

The Government of Canada has announced funding [PDF] for a new Industrial Skills Trades and Training Centre at University College of the North in Thompson, Manitoba. Funded through Western Economic Diversification Canada, “This investment will help to ensure that Manitoba’s Indigenous population has the education and skills required to succeed in the vibrant industry clusters across Western Canada, including the mining industry, the oil and gas sectors, in machinery and equipment, and within renewable energy.”

At Red River College, construction is underway of a new ceremonial grounds that includes a sweat lodge and a Medicine Wheel Garden. The expansion of the site aligns with RRC’s strategic priority “to advance Indigenous achievement over the next five years — weaving knowledge, philosophy, perspectives and content into programming and campus culture.”

The front lawn of the University of Winnipeg’s campus recently hosted a two-week Habitat Blitz Build of a new home for an Indigenous family. This Habitat for Humanity project is part of their Indigenous Housing program. “We are delighted to be partnering in such a high profile manner with The University of Winnipeg and [other] long-time supporters. This kind of multi-tiered partnership is indicative of the broad-based approach needed to improve the quality of life for families and our community at large,” said Sandy Hopkins, CEO of Habitat for Humanity, Manitoba.

Indigenous achievement is a pillar of the University of Manitoba’s Front and Centre campaign, which recently reached a total of $394,821,382 raised across all strategic priorities.

Truth and Reconciliation Commission recommendations put into action in Alberta

Manitoba Institute for Materials (MIM) opens at University of Manitoba

A newly renovated research facility will help University of Manitoba faculty and students contribute to new technology through the study and development of innovative materials. “This world-class facility is an investment by our partners in a collaborative approach,” said Dr. David Barnard, President and Vice-Chancellor at the University of Manitoba. “MIM brings together hundreds of students and researchers, university-wide, as well as industry seeking expertise and access to the finest instruments.” Funding partners for MIM include the Government of Canada through Western Economic Diversification Canada, the Province of Manitoba, the Canada Foundation for Innovation, and industry partner General Electric.

Students and staff from the University of Manitoba were part of a number of supporters from Manitoba’s post-secondary institutions at the inaugural Steinbach Pride. “It is critical that universities take the lead in supporting efforts for diversity and inclusion, and in ensuring safe spaces for all, including LGBTTQ* students and staff,” said Provost and Vice-President (Academic) Janice Ristock. “As part of this ongoing commitment, this year the University of Manitoba stepped forward as a sponsor of Pride Winnipeg activities. Participating with community members this weekend in Steinbach is consistent with this university’s province-wide scope and engagement.” The Brandon University Students’ Union also showed their support. The University of Winnipeg’s Dr. Catherine Taylor, who researches LGBTTQ* youth well-being at Manitoba’s schools, spoke at the event.

This September, Brandon University will begin offering first-year courses for students in Dauphin, Manitoba. “The content of the courses will be exactly the same in Dauphin as it is in Brandon,” said Steve Robinson, BU’s Vice-President (Academic & Provost), who oversees the program. “With the high quality of first-year Brandon University education now offered in Dauphin, it will be easier and more convenient than ever for students to access their choice of post-secondary education. This is great news for Dauphin, for the Parkland and for Manitoba.”

Assiniboine Community College has partnered with Waywayseecappo First Nation to offer a part-time certificate program for Education Assistants. Eighteen students from the region began the program in September of 2015 and many are already working in the field. This local program has had a significant impact on the community. “If we did not have this program in our community the chances are they would probably not take this course on their own,” said Jackie McKee, Finance Officer at Waywayseecappo First Nation.

Red River College and Manitoba Institute of Trades and Technology have renewed their commitment to partnerships and shared resources through an MOU. “This new agreement builds on the strengths of MITT and RRC by growing the relationship between both of our institutions,” says RRC President Paul Vogt. “Not only will today’s commitment support our work in driving our province’s skilled trades agenda, but it will put us in a position to collaborate on initiatives that help all students succeed, including Indigenous, newcomer and international students.”

After consulting with stakeholders, RRC has revised its mission, values, and vision statements to reflect the College’s focus on sustainability, community service, and global recognition. “We’re really putting an exclamation point on what has always been a strength for the College,” says RRC President Paul Vogt. “We specialize in applied teaching and learning, and everything we do serves the needs of Manitoba communities.”

Seven Physics students from the University of Winnipeg and the University of Manitoba presented at the Women in Physics Canada conference in Saskatoon, SK. “I began my studies in Physics at The University of Winnipeg with some trepidation, worried that I might be walking into a boys’ club,” said UWinnipeg graduate, Mary Houston (BSc 16). “On the contrary, I found a fun and inclusive community with tonnes of smart ladies in my classes and supportive professors teaching them. I am optimistic that the future of physics will include a more gender-balanced selection of scientists.”

The Natural Sciences and Engineering Research Council of Canada (NSERC) has awarded over $2.2 million in grants to researchers at the University of Winnipeg. “These awards exemplify the strong connection between research and teaching among UWinnipeg faculty and students,” said Dr. Jino Distasio, UWinnipeg Vice-President of Research and Innovation. “Our faculty continues to demonstrate excellence in research in science and in establishing research partnerships.”

Three alumni and two faculty of the University of Manitoba were appointed to the Order of Canada.

Former BU President, Dr. Deborah Poff, was named to the Order of Canada. The recognition attributes her efforts to create educational opportunities for Indigenous peoples as a main factor. “Students and the community benefited from her commitment and contributions. It is wonderful that Dr. Poff has been honoured and recognized through her appointment to the Order of Canada,” said Dr. Gervan Fearon, current BU President and Vice-Chancellor. 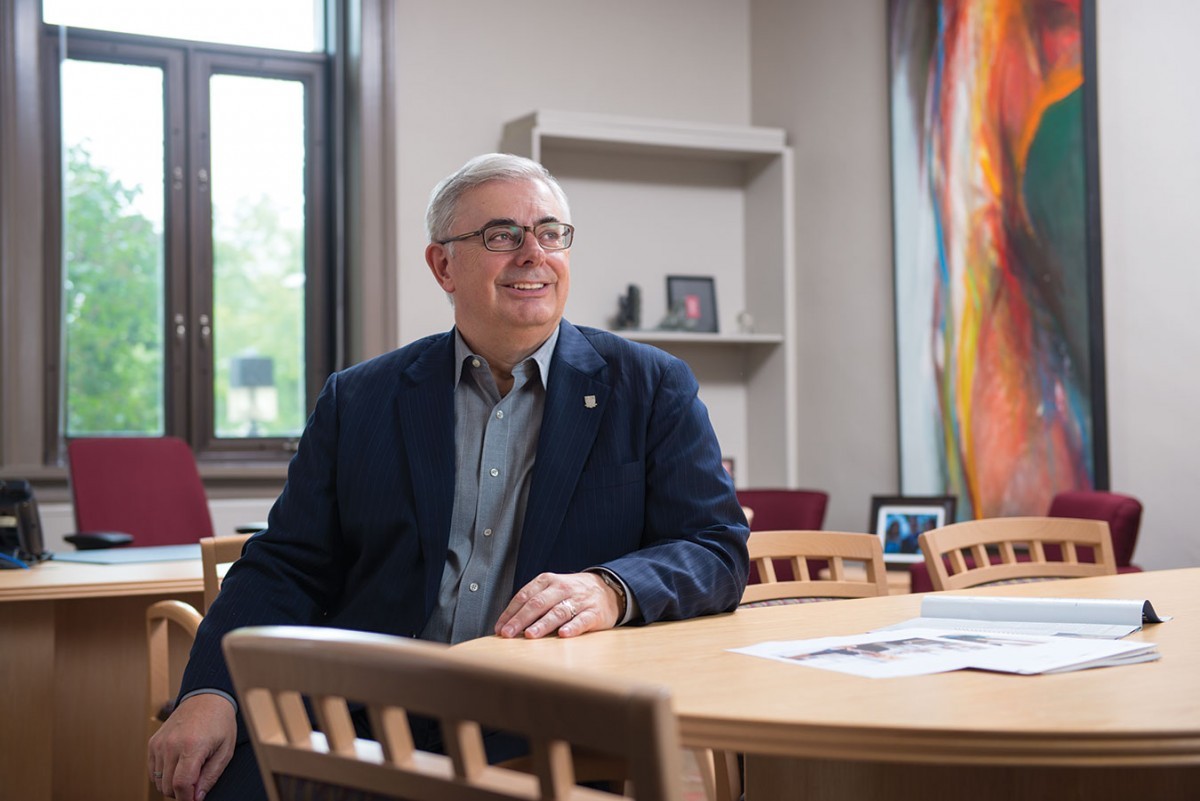 The University of Manitoba has extended the contract of its President and Vice-Chancellor, Dr. David Barnard.

What’s happening on your campus?

Staying in touch and contacting us is easy. Click the “Chat with us” icon in the bottom-right corner of this page and paste your link so we can check it out. You can also email us anytime at vhd@campusmanitoba.ca. We’re also on Twitter and Facebook, where you can join the conversation throughout the week.

Campus Manitoba is a consortium of Manitoba’s public post-secondary institutions. Through collaborative projects and shared services, we facilitate student mobility and expand access to post-secondary programs for students in Manitoba. In addition to campusmanitoba.ca, our websites include ecoursesmb.ca, setyourcourse.ca, and openedmb.ca.

The Centre for the Advancement of Teaching and Learning at the University of Manitoba hosted the fifth installment of [...]

Read More from our blog

Access to education is at the heart of everything we do.
Here are the ways we work to make learning accessible in Manitoba.

eCourses is your resource for online learning in Manitoba, providing flexible pathways for you to achieve your academic or career goals. With more than 1,200 courses to choose from, you can craft an education that works best for you. Our Virtual Help Desk is here to help you navigate through courses from across Manitoba’s post-secondary institutions.

Home to more than 380 open educational resources (OERs), the Manitoba Open Education Initiative provides support to help you (as a faculty member) review, adapt and adopt open textbooks. If you’re a student, browse our collection of open textbooks that you can read, download or print for free.

Set Your Course is your launchpad for a Manitoba-specific education or career information. Get the knowledge you need to make informed decisions about your future; with career-planning tools, labour market information and links to Manitoba’s post-secondary institutions.

Campus Manitoba’s administrative office is located on Treaty 2 territory, with offices in Treaty 1 territory, the shared traditional lands of Anishinaabeg, Cree, Oji-Cree, Assiniboine, Dakota and Dene Peoples, and the homeland of the Métis Nation. Let this acknowledgement be an opening for us to learn more about the land we live on and envision a way to challenge racism, inequality and colonialism.